For fifteen years, the Solutions from the Land’s (SfL) renewable energy platform, the 25x’25 Alliance, has compiled and compared year-to-year total and renewable energy production and consumption data to gauge progress to the 25x’25 Goal: By 2025, America’s farms, forests and ranches will provide 25 percent of the total energy consumed in the United States, while continuing to produce safe, abundant, and affordable feed, food, fiber and energy.

According to the most recent Monthly Energy Review (MER) issued by the DOE’s Energy Information Administration (EIA), both renewable energy production and consumption grew over 2018. But due to a relatively small increase in the amount of energy consumed last year, the percentage of renewables as part of that mix increased only slightly.

Total energy production in the United States increased by 7.275 quadrillion BTUs (quads) to 95.533 quads, a jump of more than 8 percent. Fossil fuel production was led by net increases in natural gas (3.984 quads) and crude oil (3.267 quads) and accounted for most of the production growth. (Coal, however, saw a slight decrease in production over the previous year.)

On the consumption side, a total of 101.268 quads was consumed in the United States last year, an increase of 3.461 quads over 2017. Consumption of most energy sources (natural gas, petroleum, nuclear, geothermal, solar, wind and biomass) increased, except for coal and hydroelectric power. This is the first time U.S. energy consumption exceeded 100 quads of energy since 2007. Total fossil fuel energy consumption increased to 81.161 Quads, a hike of 3.144 quads (4.03 percent) over 2017 levels.

Given that the total renewable energy consumption (11.515 quads) was less than total renewable energy production (11.716 quads) in 2018, it might be asked: Why the 0.201 quad difference? The United States is now a net exporter of biomass-based energy when accounting for the export of biofuels (ethanol and/or biodiesel) and compressed wood pellets. 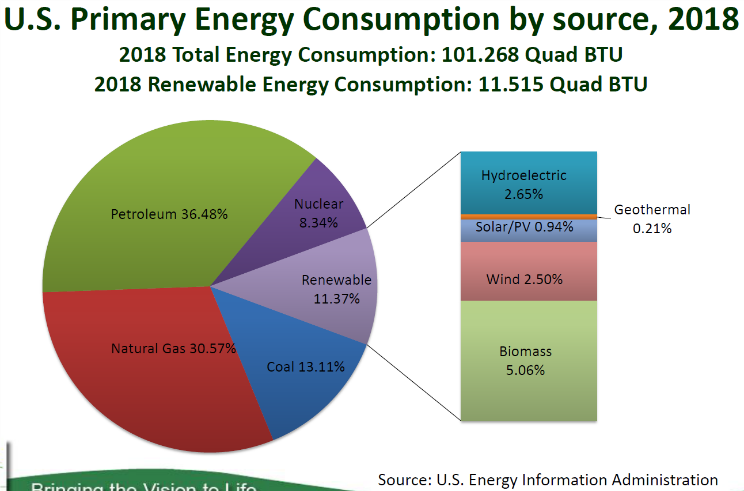 The 2018 numbers drive home the need for the right local, state and federal policies and investments that can enable the country to close the energy gap with renewable energy produced domestically from sustainable feedstocks and renewable resources, mostly from our rural areas.

When the 25x’25 Goal was introduced fifteen years ago, it was seen as the answer to a national energy strategy that lacked vision. At that time, the 25x’25 Goal was the sort of long-term vision the country needed. To achieve our goal, policy makers and the consuming public must strengthen their commitment to a secure and clean energy future.

Solutions from the Land commends Agriculture Secretary Tom Vilsack and the USDA for plans announced last week aimed at restoring forests, improving resilience and addressing climate change challenges. The strategy is refreshing and pragmatic in its approach to stabilizing a resource that has grown...

END_OF_DOCUMENT_TOKEN_TO_BE_REPLACED

SfL’s 21st Century Renaissance vision and catalytic model for agricultural solutions to global sustainable development goals (SDGs) was featured in an article published last week in the 2022 “Smart Agriculture” edition of The Bridge, a prestigious journal published by the National Academy of...

END_OF_DOCUMENT_TOKEN_TO_BE_REPLACED

SfL Board of Directors member Pat O’Toole, a Wyoming cattle and sheep rancher, testified today before the U.S. Senate Committee on Energy and Natural Resources Committee, telling lawmakers that the massive, historical and devastating drought plaguing the West has gone on “with no end in sight.”...