The following statement was issued by SfL Board Member Bart Ruth, a Nebraska corn and soybean producer; a former president of the American Soybean Association and Chair of the 25x’25 Renewable Energy Alliance.

On Monday, the EPA acted to further tighten the federal standards for greenhouse gas (GHG) emissions in the nation’s passenger vehicle fleet. While the decision to strengthen the stringency rule proposed in August was not unexpected, SfL was disappointed that the final rule did not include provisions to improve fuel quality by reducing the aromatic content of gasoline. Aromatics are base components derived from fossil fuels that blenders use to increase gasoline’s octane rating, a measure of the fuel’s effectiveness. However, aromatics also have been deemed threats to public health, damaging respiratory and cardiovascular systems.

While we recognize that increasing emissions standards is an important pathway to addressing climate change, so too is increasing the stringency of standards for fuel quality. While the proposal includes incentives for the production of vehicles with zero or near-zero emissions technology, it does not include any provisions that could significantly reduce GHG emissions from gasoline powered vehicles, an enormous, missed opportunity. Research shows that greenhouse gas cuts that could be achieved by using higher-octane midlevel blends with ethanol would equal those that EPA thinks are available from electrifying the vehicle fleet. Fortunately, in its announcement today EPA did acknowledge the need for additional rulemaking to make further improvements in GHG and particulate matter emissions. SfL stands ready to share research and other information with policy makers to maximize the benefits that can be gained from high-octane, low-emission fuels. 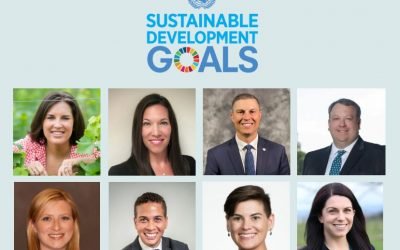 Eight prominent voices in the U.S. food and agriculture sectors have come on board as farmer envoys for Solutions from the Land. They join SfL as part of the organization's broad mission to advance land-based solutions to the interconnected challenges the world now faces, ranging from food and...

END_OF_DOCUMENT_TOKEN_TO_BE_REPLACED

In light of world events and our vulnerability they underscore when we honestly acknowledge our dependence on petroleum-derived fuels, Solutions from the Land (SfL) President Ernie Shea has issued the following statement: "SfL applauds President Biden's goal of doubling America's clean energy...

END_OF_DOCUMENT_TOKEN_TO_BE_REPLACED

Solutions from the Land (SfL) wholeheartedly endorses Partnerships for Climate-Smart Commodities, a new USDA program announced today by Secretary of Agriculture Tom Vilsack. “This exciting new program provides another opportunity and pathway to enable farmers, ranchers, forest landowners and other...