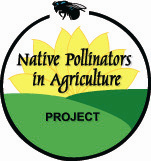 Pollinators, which include bees, insects, birds, and other animals, are vital to production agriculture. Approximately 30 percent of the food and fiber crops grown throughout the world depend upon pollinators for reproduction. Recent significant declines in populations of managed and native bees and other pollinators pose a real threat to production agriculture that could result in billions of dollars of economic losses to the sector and the national economy. A number of initiatives and programs have been designed to rebuild populations of native pollinators and enhance the pollination services that they provide; however, leadership for most of these efforts has come largely from outside the agricultural community.

In 2006, a group of national agricultural and conservation leaders came together to form the Native Pollinators in Agriculture Project to explore how native pollinators could supplement the pollination services provided by managed bees, and in turn increase on-farm productivity and profitability. The Native Pollinators in Agriculture Project for the first time presented findings and recommendations developed by individuals who produce or support the production of food, feed, and fiber. This website is intended to showcase the efforts of the group and serve as a resource for agricultural leaders and growers, service providers, and partners with interests in improving profitability, food security, and biodiversity.